Sunglasses were devised centuries ago to protect the eyes from those sun rays considered too strong and annoying, then over time they became a must-have, an aesthetic detail that characterizes and distinguishes us.

Of course, in the past, sunglasses did not feature as many shapes or details, when they later became an integral part of fashion and of the pop culture, then saw the emergence of different shapes, styles and colors, grabbing an important slice in fashion and thus consequently in popular desire.

But what elected sunglasses as a must-have were actors, directors and rock stars, who began wearing them habitually to conceal their looks and try to make themselves as unrecognizable as possible.

Of course, this inevitably influenced the mass and marketing of the sunglasses themselves, becoming a sine qua non accessory. It is precisely thanks to actors, VIPs and rock stars that some eyewear models become iconic and immortal in the collective imagination.

At Bottega di Sguardi in Florence you can immerse yourself in a 360° experiential journey in search of the eyeglass or sunglass that best represents your style and personality.

Iconic Glasses: Models That Made History

Once the fashion for sunglasses broke out, they have undergone a constant and exponential evolution that has seen them, over the centuries, both radically change into trendy shapes and colors, but also renew themselves by drawing inspiration from their own past forms later elevated to must-have status.

Iconic glasses, real models that have made history.

We see them in metal, small and round in the sixties, just think of the flower children or pop culture, and then to John Lennon, to immediately understand the genre in vogue in those years.

In the 1970s, however, much larger and square, so-called oversize frames, mostly made of acetate and with thetortoiseshell effect among the most popular.

However, it was in the 1980s that we saw a real boom insunglasses-everyone had at least one, there was a return to cat shapes for women, and we saw in films the teardrop frames that, needless to say, won everyone’s soul.

At the same time, combination eyeglasses, with acetate temples and upper front and metal lower front, dictate the law.

Then, in the 1990s, frames decreased in size and became more angular and increasingly rectangular, or soft but squashed like punk ovals.

But the nice thing is that all these fads are always in vogue, they come and go, they always and forever exist.

At Bottega di Sguardi’s Florentine Boutiques on Via Marconi 19fr and Via del Parione 54r, we are ready for you to enjoy a wide selection oficonic eyeglasses and sunglasses.

Over the years, sunglasses became a symbol of belonging to a group, embodied ideals and gave appeal to the wearer.

After all, it is nice to protect one’s eyes from UV rays, but it is even nicer to feel close to a movie star or rock star wearing the very same model as us.

We can then think of the cat-eye worn by actresses also during this period or, later, the squared-off glasses with a slight cat-eye cut that Bob Dylan wore under any circumstances.

However, we cannot forget the quintessential roundel, worn by John Lennon and even Janis Joplin, among others.

At Bottega di Sguardi in Florence, you will be able to relive the excitement of thesetimeless designs , as we work largely with brands that take their very inspiration from the past albeit with a touch of the present and future.

Iconic Eyeglasses, Most Famous Ever

Surely, among the most famous iconic eyeglasses of all time are those worn by a famous Italian director who made film history, Federico Fellini.

This is a large, square-shaped, charismatic and elegant pair of glasses, not at all obvious, so much so that one of the world’s best-known and most coveted luxury eyewear brands,
Jacques Marie Mage
, paid tribute to him by creating theFellini eyeglass.

This is a
glasses completely handmade in Japan
, with 10mm-thick plates of Japanese acetate, which needs 300 steps before it can be called finished.

Charismatic eyewear, just as our beloved director was, offered in alimited run with the serial numbers hand-engraved inside the temple. Genuine
limited edition sunglasses
for lovers and collectors.

Among the few Jacques Marie Mage retailers in Europe, the Florentine Bottega di Sguardi Boutiques stand out, in which you can experience an exclusive journey into the most luxurious brand of the moment.

We speak of iconic ey ewear when we are in the presence of glasses that have profoundly marked style and fashion through the ages, they are timeless classics, timeless and charismatic shapes that have dictated the taste of wearers for ages.

There are many, for example, iconic men’s glasses-just think of the legendary frames worn by the likes of Bob Dylan, Jack Nicholson or Marcello Mastroianni.

Bottega di Sguardi decided to create its own line of eyewear specifically to pay homage to the milestones we have seen worn by so many stars, rock stars and artists. These are exclusive glasses, completely handmade in Cadore’s oldest factory, that pay homage to the iconic eyeglasses and sunglasses that have made history, adding the Bottega di Sguardi touch and making them unique in color, shape and detail.

These are super-exclusive limited editions that you can only find inBottega di Sguardi’s Florentine boutiques , one in the heart of downtown Florence at Via del Parione 54r, and the other at the foot of the spectacular Florentine hills, at Via Marconi 19fr.

Arguably themost iconic sunglasses for women is the cat-eye model, created by designer
Altina Schinasi
in the 1930s.

Altina, following an eye examination was supposed to start wearing glasses, but she was horrified by the models they proposed, so she designed herself a pair of glasses that she thought was most suitable for her, feminine and eccentric for the time, and was inspired by the mask carnivalesque Harlequin.

However, the eyeglass is not successful, indeed many opticians and shopkeepers of the time call it an abomination, so in its early years the cat-eye model was mostly worn by secretaries.

Then comes Marilyn Monroe, who in the 1950s wears them in the film “How to Marry a millionaire,” thus began the planetary success of thecat-eye glasses, since from this moment all women will desire one.

Even today, the cat-eye is still a much-desired shape for women; one only has to look in the pop scene to see icons like Madonna o Rihanna wearing it in all of their femininity.

In Via del Parione 54r and in Via Marconi 19fr, at our Bottega di Looks in Florence, our team of experts is waiting for you to experience one of the most exciting journey to discover this iconic women’s eyewear.

Icons of Glasses in the Movies

First in chronological order is the sunglass model worn by the Diva par excellence Audrey Hepbburn in “Breakfast at Tiffany’s,” a large, very dark-lensed pair of glasses that prior to this film was not used as a prop.

The very photograph of Audrey wearing this eyewear established her as a style icon.

Then if we were to give an award for the most famous glasses in cinema, it would definitely go to those from the movie “The Blues Brothers,” in which the famous square black glasses that have conditioned viewers of any era from 1980 onward stand out.

Who can forget the most popular eyeglasses in cinema? We are of course talking about Harry Potter with his round glasses in perfect Japanese style, which greatly contributed to increasing the aura of great intelligence around the protagonist.

We then find at high altitude themost famous aviator ever worn by the rebel Maverick, played by Tom Cruise, which became a must-have for all generations of the time.

Of all these eyewear icons in the movies, at Bottega di Sguardi Boutiques in Florence, you can find a wide handcrafted and limited-edition selection of the world’s most sought-after brands.

One of the most fitting examples of VIP glasses is undoubtedly the sunglasses worn by Bob Dylan, with which he managed to create a style inseparable from his persona.

It was in the 1960s that Nobel Laureate and Rock Star Bob Dylan toured the world with his music and especially his black glasses, adding glamour to glamour. It’s a square frame with a slight cat-eye cut, a timeless pattern and an all-time favorite.

Jacques Marie Mage wanted to pay tribute to the rebellious American singer-songwriter by creating one of the most coveted glasses of the moment, the Dealan, a pair of glasses with bold volumes and sharp lines, extremely charismatic, just as Bob Dylan was with his inseparable dark glasses.

This highlights how a unique relationship can be created between a man and his glasses.

In Florence, in the Bottega di Sguardi Boutiques, we are waiting to offer you an emotional and sensory journey that will lead you to find your Dealan.

Julius Tart Optical
is an original American brand that made eyewear history in 1950s America; in fact, its models were worn by celebrities such as James Dean, Woody Allen, and Johnny Depp.

These are. sunglasses and eyeglasses with iconic shapes and an enviable quality, in fact they are completely handmade in Japan with sheets of Japanese cellulose acetate, directly derived from the cotton plant, and you can feel this as soon as you touch a Julius Tart eyeglass, you can feel the compactness of the eyewear and the balance in the fit.

In Florence at Bottega di Sguardi we have a wide selection of Julius Tart to offer you so that you can have a unique experience through 1950s Manhattan.

We are pleased to present to you in Florence at Bottega di Sguardi Boutiques, a large and very rare selection of the most exclusive brand of the moment, the most coveted by eyewear collectors: Jacques Marie Mage.

In Babylon, a film set in a 1920s Hollywood, released in January 2022, Brad Pitt plays Jack Conrad, an established star of American showbiz.

What better iconic eyewear than the
Zephirin by Jacques Marie Mage
could have characterize it to such an extent? No one, since the Zephirin is a unique and spectacular, reminiscent of a retro design but with a definite edge, it is performant, full of personality and fascinating, but above all it is unique and elegant and is part of a very exclusive run of only 500 pieces worldwide..

The sunglass in question was inspired by the great philosophers and named after the Pope Zephyrinus, has a caliber typical of the pre-World War II years but a crescendo of thicknesses that give it its eclectic and unrepeatable personality.

La acetate sheet has a more unique than rare thickness of about 10mm, completely handcrafted in Japan and subjected to more than 200 passes before being finished and polished by hand.

In our two stores, which are much more than just two
eyewear stores in Florence
, you can find iconic sa sunglasses made by the most exclusive international designers. 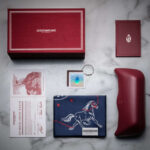 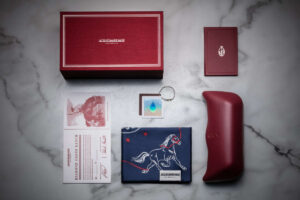 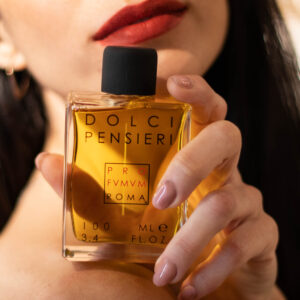 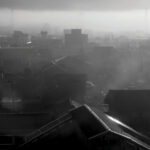